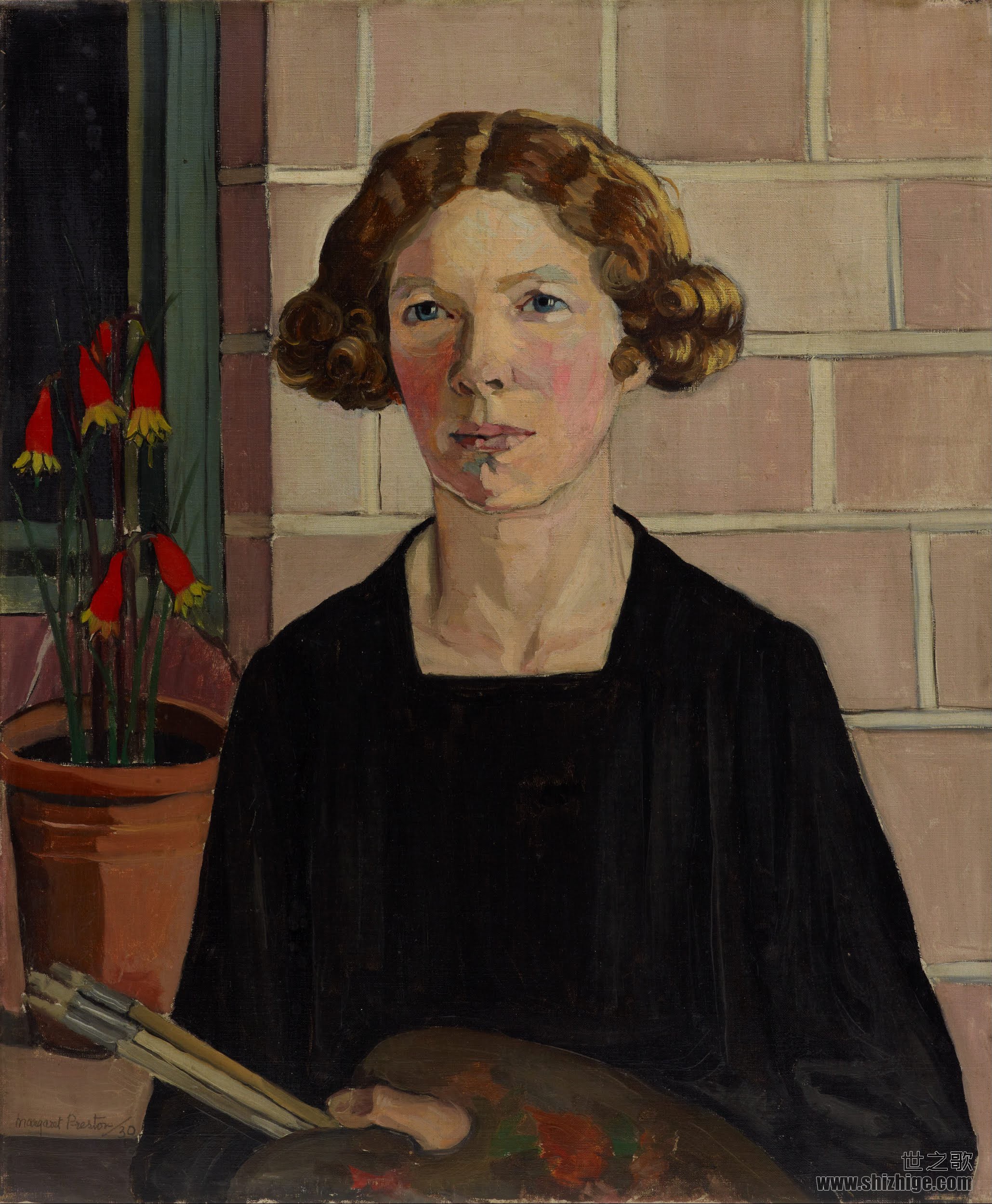 This prestigious Art Gallery of New South Wales commission clinched Preston's reputation as one of Australia's foremost painters. It is a promotional image, a picture of feminine affirmation, professionalism and modern tastemaking.Through the 1920s the Gallery trustees had commissioned portraits of ten 'notable painters', including Tom Roberts (1923), Arthur Streeton (1923), J Muir Auld (1928), W B McInnes (1928), E A E Newbury (1930) and Charles Wheeler (1930). Preston was the first woman artist to be honoured in this way, a fact that did not go unnoticed. It was a popular choice. Her flower studies and still lifes were selling well and had been extensively promoted. The December 1927 issue of 'Art in Australia' was devoted to Preston, and two years later she capped a successful exhibiting year with an Art in Australia 'gift set' publication Margaret Preston recent paintings.Preston had experimented with portraiture before the war (her 1911 posthumous portrait of Catherine Helen Spence, social reformer and inventor of the Hare-Spence system of proportional voting,hangs in the Art Gallery of South Australia). She did not pursue this genre, however, as she later explained to a Sydney Morning Herald interviewer, 'I gave it up because people used to grumble at the likenesses.' The few who sat under her mature eye were those who presumably would not grumble, such as her maid Myra ('Flapper' 1925) and her husband William Preston (1925). Those who knew Preston note the likeness of her 'Self portrait'. Treania Smith pointed out that 'You get her eyes in it – the intensity of them – as if they're out on sticks.' Gallery director Hal Missingham appreciated the figure's self-containment, the 'great purpose in the firmness of the thumb holding the palette ... a brick-wall background, set as 4-square as her Scottish character.'Preston carefully composed the tools of her trade in a shallow space: the hand and the eye, palette and brushes, the floral motif (a cheery correa in a terracotta pot behind her). We sense Preston's penetrating, intelligent gaze and strong work ethic. As she bluntly put to the Sydney Sun, 'Yes, my self portrait is completed, but I am a flower painter – and I am not a flower.'The artistic personality that Preston's self-portrait presents was relatively new in the history of Australian art. We see a modern, thinking woman, testimony to a social revolution in which Preston played no small part. So what did she think of? The women of Preston's generation did not, in the main, express the psychological depths of artistic individuality that we have come to expect in modern portraiture. Male modernists such as Picasso or van Gogh could perform the strip-tease of psychological or existential self-scrutiny to reveal pain or wild joy, alienation and even madness.But self-portraits by women moderns do not give much away; perhaps women artists felt that they could not afford to slip their guard. And Preston was no exception.We note the absence of feminine ornament and subtle use of lipstick and rouge: 'Decoration without Ornamentation – Enough or too much', to cite Preston's aphorism number 74.5 She worked her self-portrait with a palette knife and brush to flatten the composition with a precise geometry. Forms are reduced in the modernising classicism which was popular in the interwar years. The portrait carries a muted echo of her austere, cubist still lifes of 1927, while the balanced patterning of shapes and tonal contrasts will be further extended in her Aboriginal-inspired floral studies, still lifes and landscapes.Preston might not have seen herself as a flower, yet I am not so sure that she doesn't in fact paint herself as if she were one – one of her natives, perhaps. The Sydney art critic and curator Terence Maloon has astutely noted how the artist anthropomorphised her table-top tableaux, with flowers and crockery assembled together as if in animated conversation. Conversely, we could imagine that Preston paints herself as she would one of her floral arrangements: that is, decoratively, attending to the pictorial effects of formal design principles like composition, shape and colour. Decoration, Preston held, was 'the only thing worth aiming at [in] this century ... it really is the keynote of everything'. Like 'Eucalyptus' and 'Aboriginal flowers' (both 1928), she is simply structured, a little fresher (Preston does not look her 55 years), and crisper round the edges (her frizzy red hair composed in a neatly curled bob).Preston as an Australian native? Elizabeth Butel describes her neck rising 'like one of her solid cylindrical vases from the graphic flatness of her black dress'. Sydney painter Susan Norrie also thought as much in her untitled 1985 homage to Preston's 'Self portrait', going the Full Monty by rendering the artist's controlled pictorial form as a tightly bound gumnut. Perhaps it has taken a later generation of feminist artists to press fingers gently yet surely against the glass until it gives a little.Catriona Moore in Deborah Edwards and Rose Peel with Denise Mimmocchi, 'Margaret Preston', Art Gallery of New South Wales, Sydney, 2005